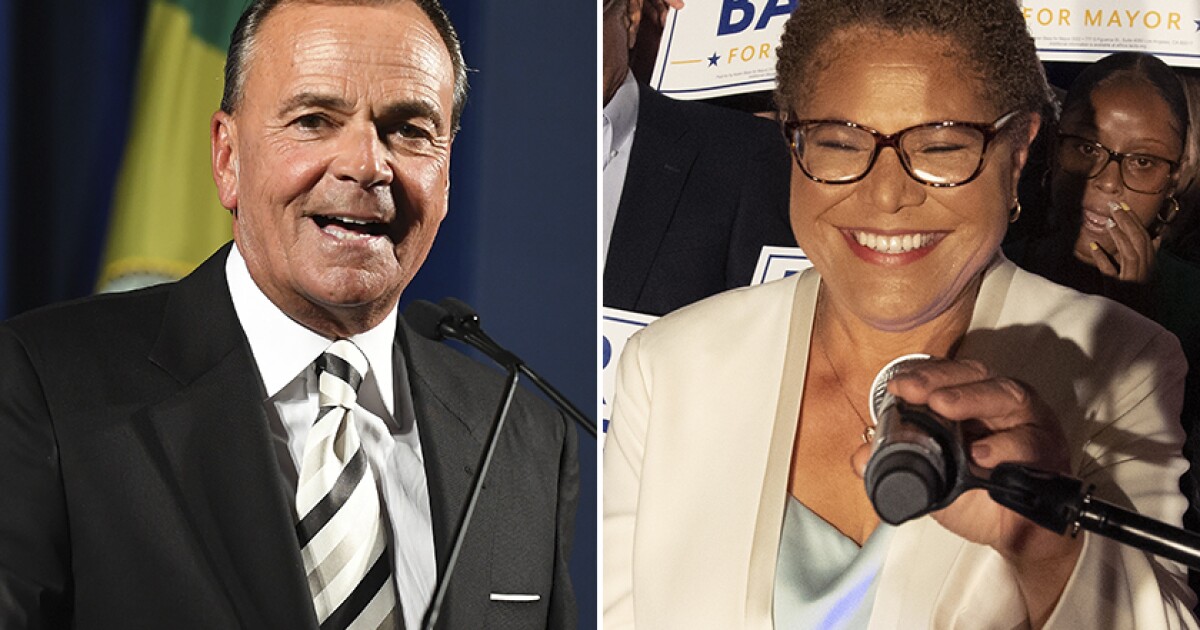 Rep. Karen Bass has widened her lead to more than 6 percentage points over developer Rick Caruso in the Los Angeles mayor’s race, according to results released Friday by the county Registrar-Recorder’s office.

Caruso initially led Bass by 5 percentage points after the June 7 election. But that order flipped as hundreds of thousands of vote-by-mail ballots were processed by county workers in subsequent days.

Friday’s updated results also boosted several progressive candidates, including one who appears to be on the path to beating a two-term Los Angeles city councilman.

Most of the remaining ballots will be counted by Tuesday, when the next update will occur, said Registrar-Recorder spokesman Michael Sanchez. County officials estimated that 74,100 ballots countywide remain to be processed, a fraction of the 1.57 million votes counted so far.

Regardless of the final tally, Bass and Caruso are assured spots in the Nov. 8 runoff because they are the top two finishers and neither will top 50% plus one of the votes cast.

Friday’s results in the Los Angeles mayoral race were in line with the results of a UC Berkeley Institute of Governmental Studies poll co-sponsored by The Times that showed Bass leading Caruso by 6 percentage points. The poll was conducted in late May.

The updated vote count also helped two candidates challenging incumbents on the Los Angeles City Council. Community activist Eunisses Hernandez now leads Councilman Gil Cedillo 53.5% to 46.5% — a lead that looks impossible for Cedillo to overcome. Because they are the only candidates in the Council District 1 race, there will be no runoff.

“The latest vote count confirms what we’ve said all along: #CD1 demands true, honest, & responsible representation in city hall,” Hernandez said on Twitter on Friday afternoon. A campaign spokesman for Cedillo didn’t respond to a request for comment.

Councilman Mitch O’Farrell fell further behind labor organizer Hugo Soto-Martinez in the race in District 13, which takes in all or parts of Hollywood, Silver Lake, Echo Park and Atwater Village. Soto-Martinez is at 40.1% to O’Farrell’s 32%; they will face each other in a runoff in November.

In the race for an open council seat on the Westside, political aide Katy Young Yaroslavsky continued to lead attorney Sam Yebri, 49% to 29.7% If Yaroslavsky garners more than 50% of the vote, she would win the race outright.

In the race for Los Angeles County sheriff, incumbent Alex Villanueva’s lead on retired Long Beach Police Chief Robert Luna tightened slightly, with Villanueva at 30.9% and Luna at 25.9%. They will face each other again in the fall election.

More than 84% of LA County voters used mail-in ballots and waited to either mail or drop them off at polling places or drop boxes, Sanchez said. The ballots’ signatures must be verified and then scanned by humans for errors or stains before they can be fed into a vote-counting machine.

The election was the first at City Hall since a new law went into effect ensuring that every voter receives a ballot, a process designed to bring in more voters and focus less on a single day of in-person voting.