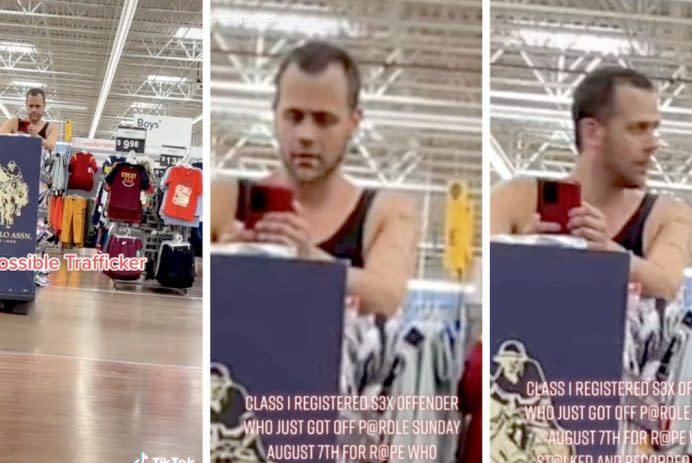 Editor’s Note: This article contains mentions of sexual violence. Please take care while reading, and note the helpful resources at the end of this story.

A mom claims she captured a would-be kidnapper following (and recording) her and her daughter while shopping. A quick search online would later reveal the terrifying identity of their alleged stalker.

TikTok mom @dd_escapades had no idea an ordinary trip to Walmart would become a scary viral experience — but after posting her hair-raising footage, she quickly amassed over 8.9 million views and 17,000 comments.

What began as a normal shopping trip at her local Walmart quickly became a terrifying experience for @dd_escapades.

Her now-viral footage begins with a shot of shoes hanging on a shelf, as she’s sneakily trying to capture the man she claims had been following her through the store.

“I don’t know him, and he’s following me and recording me,” she says, zooming in on the man. Moments later, the space the man has just been occupying is suddenly empty. “Now he’s gone, after he realized I started recording him,” she adds.

Accompanied only by her young daughter, @dd_escapades quickly found a Walmart employee and showed them the footage she had captured. The staff member informed the store manager, who sent employees out to find and remove the man.

In a follow-up video, @dd_escapades informed followers of the terrifying discovery she’d made after looking up her alleged stalker.

“He has been identified. He is a registered sex offender, class 1. … He was arrested for molestation and rape,” she states plainly in the video.

According to @dd_escapades, she turned her footage and Walmart’s security footage over to the police and filed an official report. In another follow-up video, she shared that she would be pressing charges against the man.

See this bedroom turn into a vibrant oasis after an incredible one-day renovation:

TikTokers were quick to share their own scary shopping experiences in the comments.

“This happened to us last week. We had the manager escort us out! At Walmart as well,” one user wrote.

“The same thing happened to me at TJMaxx a few weeks ago while I was with my 3 year old son and I’m 6 months pregnant… scary people out here!!!” another user commented.

“I was followed in Walmart by 3 men. Followed me to makeup, hair stuff then womens clothing section. A worker walked me out & the guys disappeared,” wrote one user.

“This is so much more common than people realize 😳,” another comment read.

According to Defense Ninjas, an organization devoted to women’s self-defense and empowerment, people who fear they’re being followed should verbally confront their would-be stalkers.

“Ask him: Are you following me? … If the potential follower doesn’t respond to your confrontation or ask, then it’s time to escalate. … Take a picture of him and call 911 very visibly,” they advise.

If you or someone you know needs support after experiencing sexual violence, contact the Rape, Abuse, and Incest National Network (RAINN) at 1-800-656-4673 or online chat with a trained counselor. You can also connect with a Crisis Text Line counselor at no charge by texting the word “HOME” to 741741.

In The Know is now available on Apple News — follow us here!

With just $1,000 and one day, this Harlem bedroom gets a brand new look:

The post Mom records ‘creepy’ man following her daughter through Walmart, is horrified when she looks him up online appeared first on In The Know.

More from In The Know:

Ring captures dad’s lightning-fast reflexes when he suddenly collapses to the ground: ‘What a save’